Did you ever want to control the universe? In this tutorial, I’m going to show you how you can make your desk the center of the universe. You are going to set up a solar system and place the sun, earth and moon in it. Also, we are going to let them circle around each other like they do in reality.

Set up the basics

You should have opened a new project with a new scene and already imported the ARUnity package. If you need support doing this please see Getting started with ARToolKit for Unity.

We now set up an AR scene as in the Getting started with ARToolKit for Unity tutorial with the difference that this scene will contain three ARMarkers and three ARTrackedObjects. 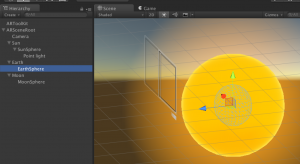 You can find filter options for each ARMarker script. You may want to play around with those to remove jittering.

If you need help during these steps please consult Getting started with ARToolKit for Unity  as the steps above are all described there in detail.

Now we are going to add and style the actual planets.

For the planets add one sphere as a child to the Sun, Earth and Moon GameObject each. 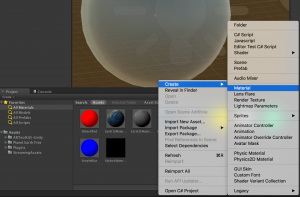 There are better models to make the solar system more realistic in the Unity Store. But they cost some money. Decide for yourself if you want to use them:

The sun also needs to emit some light so let us do that.

Setting the size brings me to the fact that we need to change the default sizes of our spheres: (x/y/z)

Also, we need to set the position of the planets. If we leave them to default they will be placed with their center in the middle of the marker and that is not what we want.

Get the planets into the correct distance

Now we are going to measure the distance between the planets (well between the markers that are linked to the planets). This is done in a similar way as in the stretchy line tutorial.

3. In Start() we look-up our line object and store a reference to it.

4. In OnMarkerFound() and OnMarkerLost() we lookup if the found/lost marker is the one we are looking for and store/release references to this marker.

5. To let the script know which markers we are looking for we define two static string members which Unity will show as text entry fields for this function. We will use this text fields and enter earth, sun, moon tags accordingly later.

6. In OnMarkerTracked() we call a private function to measure the distance and draw a line between the two markers. We use the line as an indicator if the markers have the correct distance between each other.

8. We also want the line to disappear if only one of the two markers is visible and reappear if  all two are visible.

Start the rotation when the distance is right

We are going to set-up another component that keeps track of the distance changes and kicks off the rotation of the planets. Let’s do this by creating our own component as a C# script.

1. Create another component and call it rotateAroundObject

2. Let us call rotateAroundObject every time we notice that the distance changes:

1. Add an event broadcast to the distanceLine component at the end of drawLine() function

2. Implement the event broadcast receiver method in the rotateAroundObject component

3. Additionally, we pass the measured distance to this event

3. To know which object to circle around define a public member that is used to enter the tag of the GameObject that we want to circle around. While you are at this, define two more members to store the valid min and max distance.

4. Alright, in OnLineChange() we now look up the object to circle around, check if our distance is correct and call startRotation()

We can optimize this a bit if we do not look up the rotateObject every time the line changes but in the OnStart() function. So let’s do that.

This is only three lines of code:

At this state, the planet is already circling around the other planet. To make it a bit more realistic you can also add the feature to circle in an elliptic way. You can see how that is done in code snippet.

To be able to contol the speed the planets circle around I added another public member called rotation speed. That member takes a number value and is multiplied with the time that has passed. Using this you can have the planes circle slow or fast around each other.

Now we are going to put everything in place and make the solar system work:

You can play around with this values. Just the Rotation Object needs to be the name of the object we are rotating around. 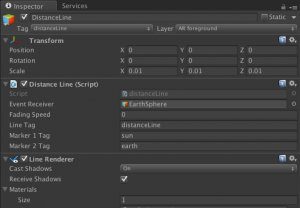 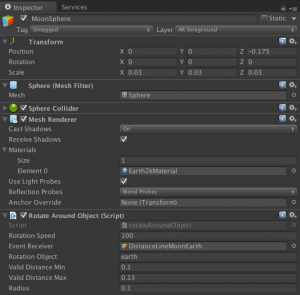 That’s it now you have everything in place and the solar system is ready to run. Let me know if you encounter any issues, have any question or general feedback.

Thanks for reading I hope to see you around soon.

Download to the Solar system unity export. (This also includes the function to fade out the lines once the correct distance is reached, which I didn’t cover in this tutorial.)